Iron Chef Providence. Battle: Everything in our Kitchen.

It was a fierce battle in apartment-kitchen stadium, Monday night, 6pm. Iron chef Molly and Iron Chef Becca battled the fiercest opponent of all, themselves. Judged by the most intimidating, awe-inspiring culinary critics known to Brown university campus (also known as Molly and Becca), the Iron Chefs put up an intense fight, desperately striving to win points for their own taste buds.

With only five more days left in the apartment, all stock-piled food had to go. The shelves stacked with all sorts of ingredients needed to be purged of their delicious load. Upon entering the kitchen stadium, Iron Chef Molly and Iron Chef Becca quickly put their heads together to come up with a battle plan. It was difficult, thinking under that kind of intense pressure, but in the end I think we all agree that they triumphed.

Under the clock, the chefs performed a miraculous feat of culinary expertise. A porcini mushroom risotto was made with one whithered onion, white rice, chicken stock, dried porcini mushrooms (ones that Iron Chef Molly had brought with her back from Italy), and a small chunk of parmesan that had lived in the back of the cheese drawer for some time. Its pungent aroma infiltrated the noses of the hungry judges, inspiring them while they cooked.

In a surprising turn of events, this rice dish doubled as an appetizer – risotto cakes - coated with flour, egg, and a Total and Kix Cereal crust, fried in some vegetable oil.

A frozen pizza crust was topped with a tomato sauce made from canned tomatoes, shallots, garlic, dried basil and oregano, simmered to perfection on the stovetop in the kitchen’s one remaining unpacked sauté pan. Over that the pizza was covered with instant spinach and ricotta tortellini, purchased from the supermarket on an experimental whim. The Iron Chefs found instant tortellini to be surprisingly delicious. Topped with parmesan and baked in the oven, the pizza looked like some kind of postmodern art object. 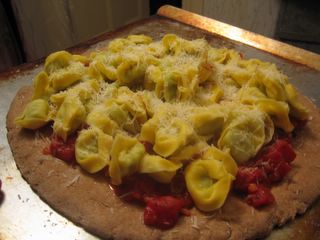 A Jiffy corn bread mix, dried cranberries added, was used to make muffins. They were topped with a crystallized ginger, walnut, and brown sugar streusel. They came out of the oven piping hot, golden brown. Frozen phillo cups (purchased last July) were filled with lemon pudding, set in the refrigerator and topped with a single frozen raspberry (until the raspberries ran out, then just plain). 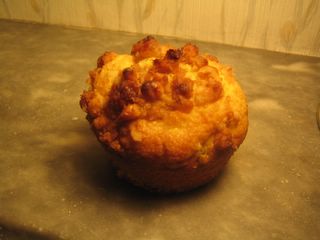 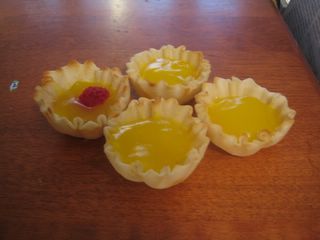 When these creations were put to the judging panel, Iron chef Molly and Iron Chef Becca were pleased to find that they actually enjoyed their dinner. The risotto was a nice balance of flavors – even the distinctive taste of Kix Cereal in the risotto cakes gave an interesting depth, certainly enhancing the eating experience. What the tortellini pizza lacked in texture and a certain mix of flavor, it made up for with heart. The corn muffins were sweet, crumbly, and followed with a nice zip of ginger down the throat. The lemon philo cups tasted like Maalox, but were pretty to look at. All in all on the scale from 1-10, Molly and Becca awarded themselves a 7.0 for flavor, and a 9.5 for plating, and a 12.0 for originality.

Battle: Everything in the Refrigerator - an overwhelming success in the minds of the only ones that count and the only ones present for the battle, Molly and Becca.